Parents and caregivers bookmark Common Sense Media’s website for balanced reviews of movies, television shows, books, apps and games. When findings from a 2021 report found that the diverse content families are hoping to share with young viewers does not match what the entertainment industry is producing, Common Sense answered with a helpful new tool.

We talked with Common Sense Media’s Senior Director of Content Li Lai about the Inclusion Imperative report that formed the groundwork for Common Sense’s parent-facing rating tool to help families evaluate content through a diversity, equity and inclusion lens.

The goal of the new “Diverse Representations” rating is to serve as a compass for parents seeking diverse content. Ratings are sortable by age and will appear alongside ratings for positive role models and consumerism. This work began with findings from the Inclusion Imperative report.

Tell us a little about the reason Common Sense decided to take on the Inclusion Imperative report.  Media use has a significant impact on how we view and treat members from our own and other ethnic-racial groups. Exposure to negative representations of ethnic-racial groups in the media can contribute to the development of stereotypes, prompt bias, encourage prejudice and discrimination, and even undermine media users’ esteem.

On the other hand, seeing constructive depictions can reduce stereotyping, support self-esteem, and encourage better interracial relations. And representation in the media continues to be a challenge, with white individuals over-represented both in front of and behind the camera. Many parents are looking for positive portrayals for their children; in fact, a recent survey of Common Sense parents found that “positive race/ethnicity portrayals” was the second highest ranked interest among Black parents who visit the site.

What experience and insights did the team who co-authored the report bring to this study? There were four authors of the report. Researchers offered broad expertise in how children and adolescents make sense of their racial, ethnic and gender identities; how cultural stereotypes and expectations shape the development and intersectionality of these identities; and the ways in which multiple identities influence social-emotional and academic outcomes. Report authors also brought expertise in the influence of media use on racial and ethnic stereotyping and group identity across media platforms and genres for parents with children of different ages.

There’s often a disconnect between the entertainment industry’s intent to increase representation and the diversity currently represented in the media. What are some systemic reasons for the gap? Existing processes were established to privilege a select few. It’s difficult to expect a different outcome, regardless of intent, if the entertainment industry continues to follow those same processes. If no new policies are put in place (e.g. inclusion riders, hiring quotas, diversity targets, etc.) that will force a change in behavior, then industry workers will continue to take the path of least resistance, which perpetuates the non-diverse status quo.

Did the report outcomes confirm the team’s assumptions about the connection between the role of media and racial identity?  Yes, we knew that depictions of race and ethnicity in the media were related to children’s development of identity, self-concept and self-esteem. However, we believe we are the first to systematically tie children’s own ethnic-racial development to the images they are exposed to, with specific guidance for what media should provide to children at different ages.

depictions of race and ethnicity in the media were related to children’s development of identity, self-concept and self-esteem.

What findings most surprised you?  We think it is illuminating that media created for even the youngest children should consider inclusiveness and representativeness. Infants pay attention to and gather information about ethnicity-race, starting from the first few months of life. By the preschool years (age three to five), children have a working understanding of ethnic-racial groups and are forming their ethnic-racial attitudes and identities.

By the preschool years (age three to five), children have a working understanding of ethnic-racial groups and are forming their ethnic-racial attitudes and identities.

What are some specific ways Common Sense has implemented DEI in content, hiring, or in other aspects of the organization?  In the consumer-facing editorial space, this past fall we launched a brand new section called “Diverse Representations” within all of our media reviews to highlight positive portrayals and flag negative and/or problematic ones. In addition to applying this new section to all reviews going forward (more than 1,300 at last count), we will be going back and updating older titles with this perspective and content as well. We've also been diversifying our reviewing and editing team, since we all benefit from having a wide range of lived experiences represented in our work.

What are the biggest diversity issues in media that the report highlights? Where can the entertainment industry start to address them? Existing and ongoing research has been tracking racial-ethnic representation in TV and film for years, but Common Sense Media uniquely approaches the topic from a child development lens. How do kids build an understanding of ethnic-racial identity? And how does media play a role in that process? By delivering more inclusive representations of different demographics—not just by ticking boxes, but through non-stereotypical roles and depth of narratives—the entertainment industry can begin to give kids equal opportunity to feel seen and understood by the media they consume, with positive outcomes such as higher self-esteem or more positive attitudes toward other ethnic-racial groups. 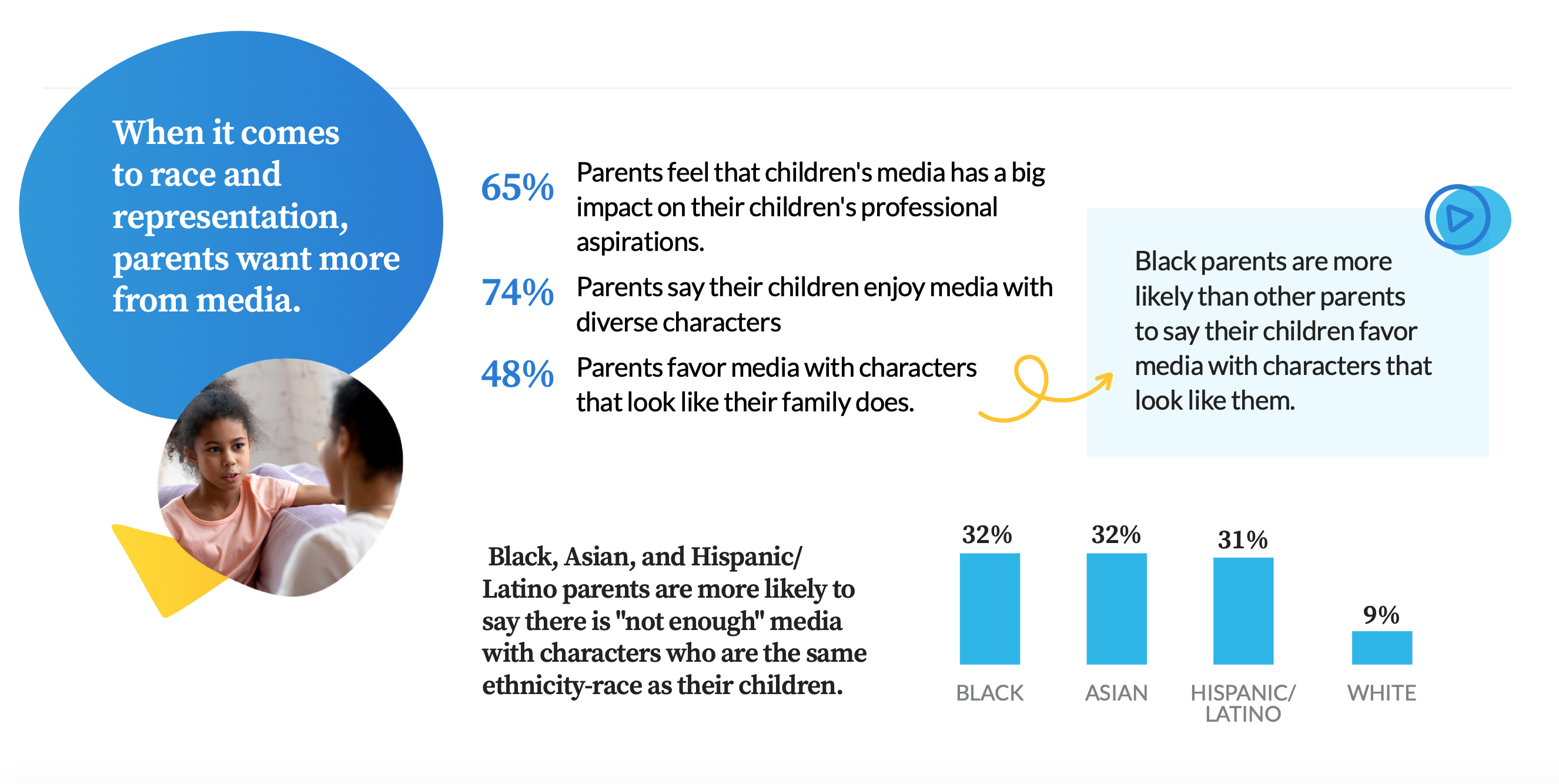 One report finding confirmed parents want to see more nuanced BIPOC representation that provides  positive role models and dispel damaging stereotypes in media. How can parents choose culturally and linguistically inclusive media now, even as new entertainment industry content is still emerging? Better media representation is an industry-wide effort that involves pressuring media criticism to evolve as well. To that end, publications such as Common Sense Media are striving to meet demand through initiatives such as the launch of the “Diverse Representations” section in our media reviews, which is targeting 4K+ by the end of 2022.

In addition, we're revising our ratings rubric with the help of cultural and child development experts so that our reviews holistically address BIPOC media representations, not just in our “Diverse Representations” section. Outside of Common Sense Media, best practices for finding nuanced BIPOC portrayals include following the recommendations of critics of color, referencing BIPOC-led entertainment publications and book clubs when deciding what media to consume and prioritizing content with BIPOC creators behind the camera.

Bezos Family Foundation supports Common Sense Media’s work to help families, especially those living in poverty, use their experiences with media and technology as “everyday” moments that can strengthen the parent-child relationships and executive function skills children need to succeed in school and in life.