Big Ideas on a World Stage

Inside the inaugural TED Bezos Scholar Salon in NYC. 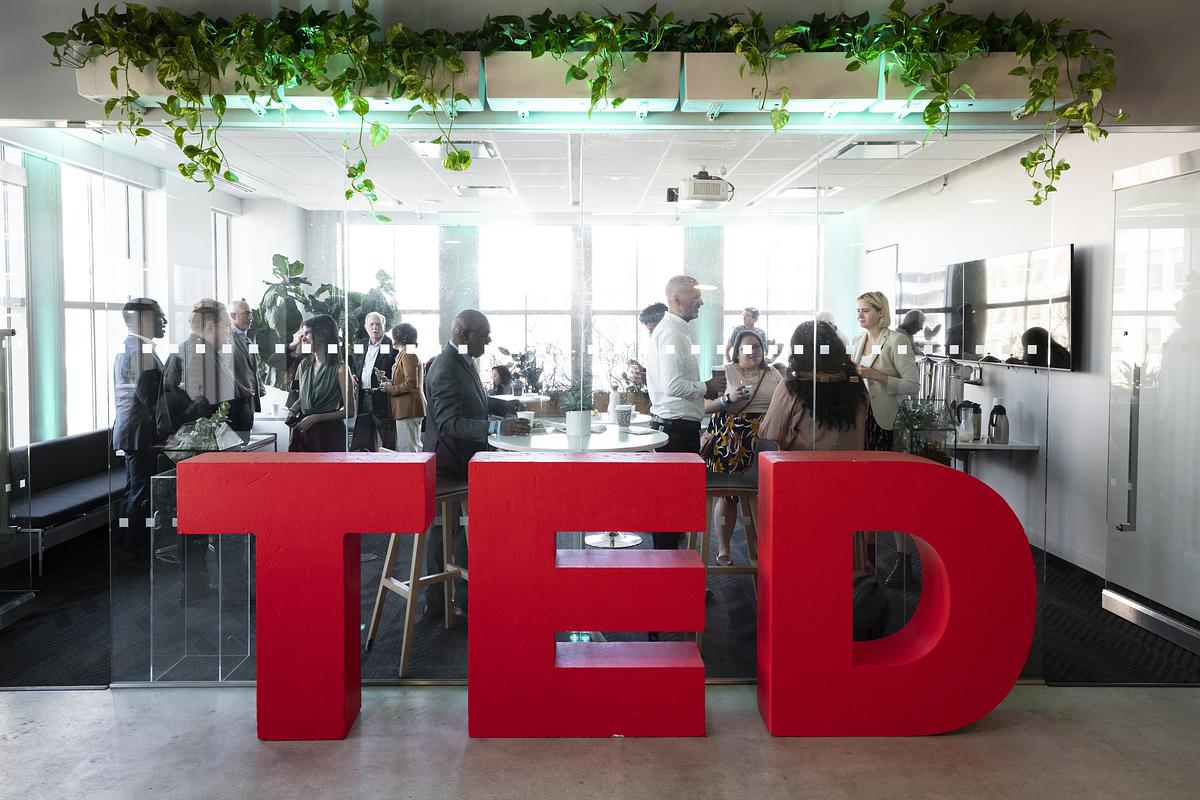 Seats were filled, lights went down, cameras rolled, and alumni from the Bezos Scholars Program took the stage at the inaugural TED Bezos Scholars Salon at TED’s World Theater in Manhattan in September of 2022. Each year, the acclaimed TED Fellows program gathers a multi-disciplinary group of global leaders in their field to speak on a range of big ideas. And for the first time, a group of five extraordinary Bezos Scholar alums experienced their own special version of the acclaimed TED Fellows program in a new partnership.

Scholar alumni from various cohort years, going back as far as 2005, applied for the opportunity, and five were selected. Each Scholar participated in a series of speaker workshops led by TED team experts, workshopped several drafts of their talk in the months-long prep, partnering with a speaker coach and TED Fellow mentor to develop their topic and theme. Fact checkers and TED Fellows staff were also part of the team working to support speakers. Read on to learn more about these impressive changemakers and their formative experiences at TED. 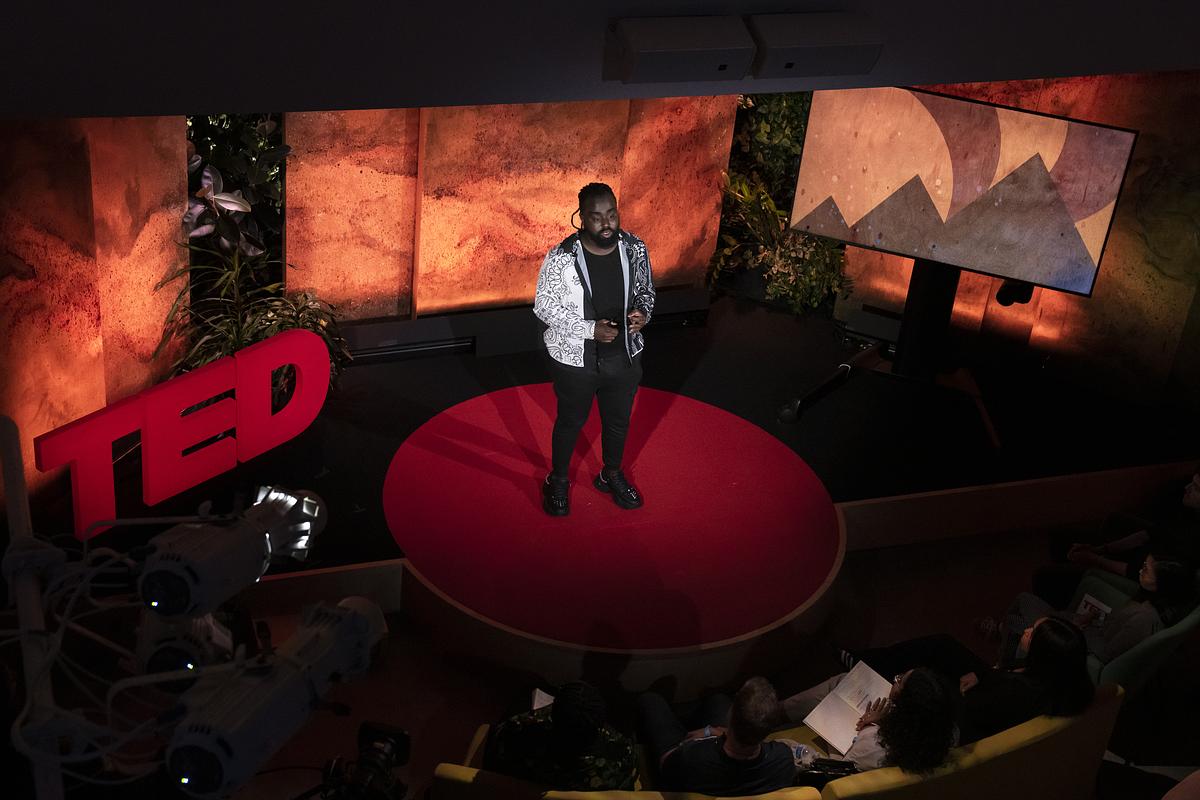 Okong’o Kinyanjui remembers feeling trapped and isolated as there was no safe way to find connection as a young queer man growing up in Kenya. He eventually found his way to the African Leadership Academy (ALA) in South Africa and became a Bezos Scholar; the academy has had a partnership with the program since 2011.

Kinyanjui says that in many countries on the African continent, talking about gender identity and sexual orientation can be unsafe, with LGBT+ Africans experiencing blackmail and threats as well as physical acts of violence. That’s what inspired Kinyanjui to cultivate a safe online space offering practical resources and support for LGBT+ Africans, launching the Queer African Network. The website connects queer Africans with mentors, fundraising and community-building. “We get a lot of testimonials and feedback from people just seeing how our platform has helped them get a job or improve their resume. Those stories just keep us going.”

Kinyanjui says that with a supportive network, it’s possible to do things in life “that you never thought would be possible.” In reflection, he shared that, “I was able to push through because I’ve seen what supportive networks like ALA, the Bezos Scholars Program, and TED Fellows can do.”

“It’s definitely high pressure and very risky work,” Kinyanjui says. “But with community, we’re so deeply bonded that when things are hard, we work through it together to keep going. We’re changing systems. We are now deeply connected across countries and are seeing the interconnectedness between all the issues we’re trying to face.” 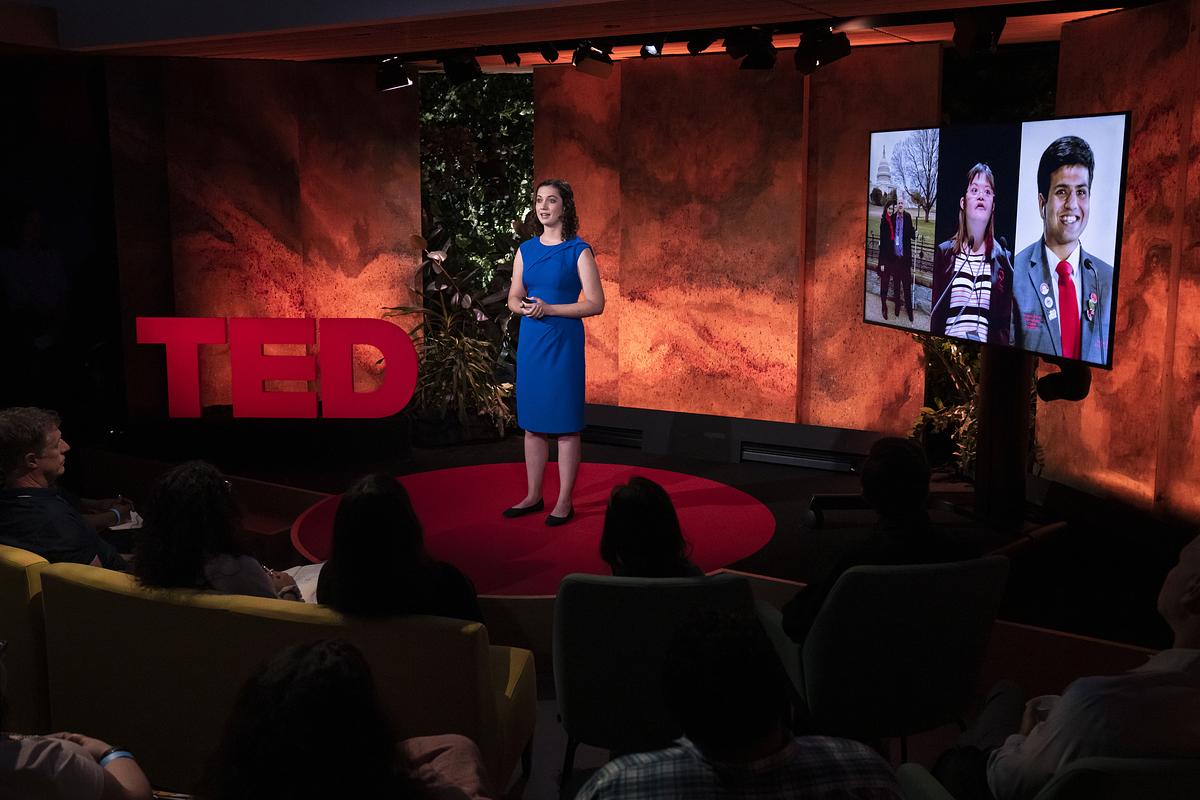 People with disabilities account for about 15 percent of individuals around the globe, but Meghan Hussey says we’re far from a reality where society is inclusive and all can thrive. Hussey is working to shift prevailing false assumptions about disability that hold millions of people back. “There’s a lot of attitude barriers. Globally, people with disabilities are one of the most marginalized populations in the world,” she says.

When Hussey began her advocacy work supporting individuals with disabilities in 2011, the conversation around inclusion was not happening and change needed to begin from the ground up. Hussey is undeniably optimistic in her work to overcome attitude barriers around disability inclusion. “When I was doing research in different places, I’d meet with all these grassroots groups and disability activists and family support networks and people doing the most incredible things.” Hussey says. She says her optimism comes from the community level, first seeing shifts her family has been able to make in their own small town through advocacy for her sister who has disabilities.

A former Fulbright Scholar and current Special Olympics Global Development and Government Relations Director, Hussey outlined four key steps to fighting stigma and creating an inclusion for people with disabilities in her talk. First, she says we need to look at assumptions and stereotypes we internalize about disability. Second, we should work to dismantle those stereotypes as they get in the way of welcoming disabled people into our work and community. Third, we need to understand and acknowledge how disability intersects with other identities like gender and race. Finally, we must listen to and center the voices of people in the disability community. “There’s still a perception that having a disability makes you less of a person that would be deserving of opportunities and of human rights. A lot of us take that for granted.” 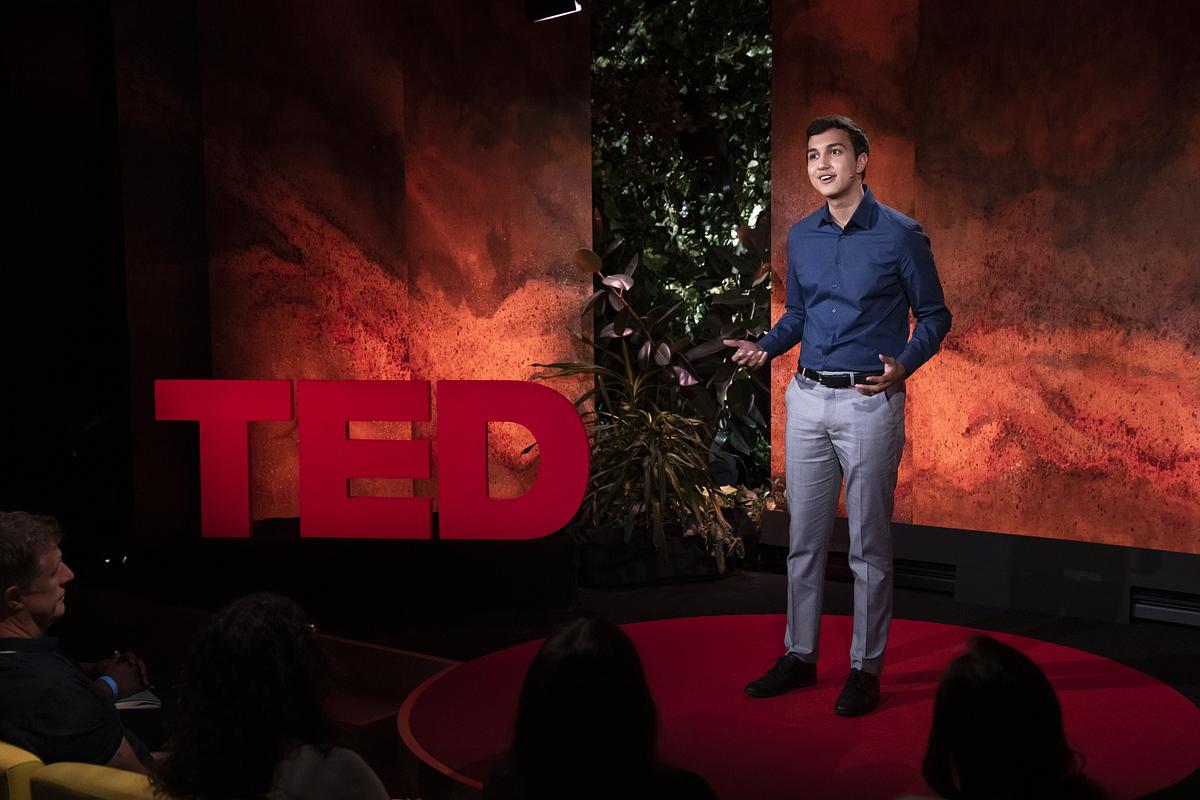 Matthew Garcia spoke on access in music education and academia on the TED World Theater stage. Garcia launched a nonprofit called Through the Staff during the pandemic to connect young musicians of color living outside of urban cores with online lessons from leading players.

“There’s just a massive underrepresentation of people of color in our country that has come from years of systemic racism and oppression. My work is really fighting back against that and allowing the people to have opportunities that should have always been theirs.”

The son of immigrants, Garcia was inspired to close the musical education gap by lived experience; he began playing the viola as a young person living near the US-Mexico border but lacked access to the education and resources enjoyed by musical peers in large cities. He believes that anyone, anywhere, can do anything if you connect them with the resources they need to thrive.

For Garcia, speaking on a TED stage has been a long-term dream. “Growing up, I always watched TED talks, so when I realized I’m actually on the TED stage, it felt like a full circle moment.” When he first began developing his talk with the TED Fellows team, Garcia recalls the group being told, “You all are incredible. This won’t be your first talk.”

He says from that moment, Scholars experienced a culture of support that lasted throughout the process. “I can’t do this alone. And no matter how much of a powerhouse you are, it’s about the community you bring with you and the communities you impact.” 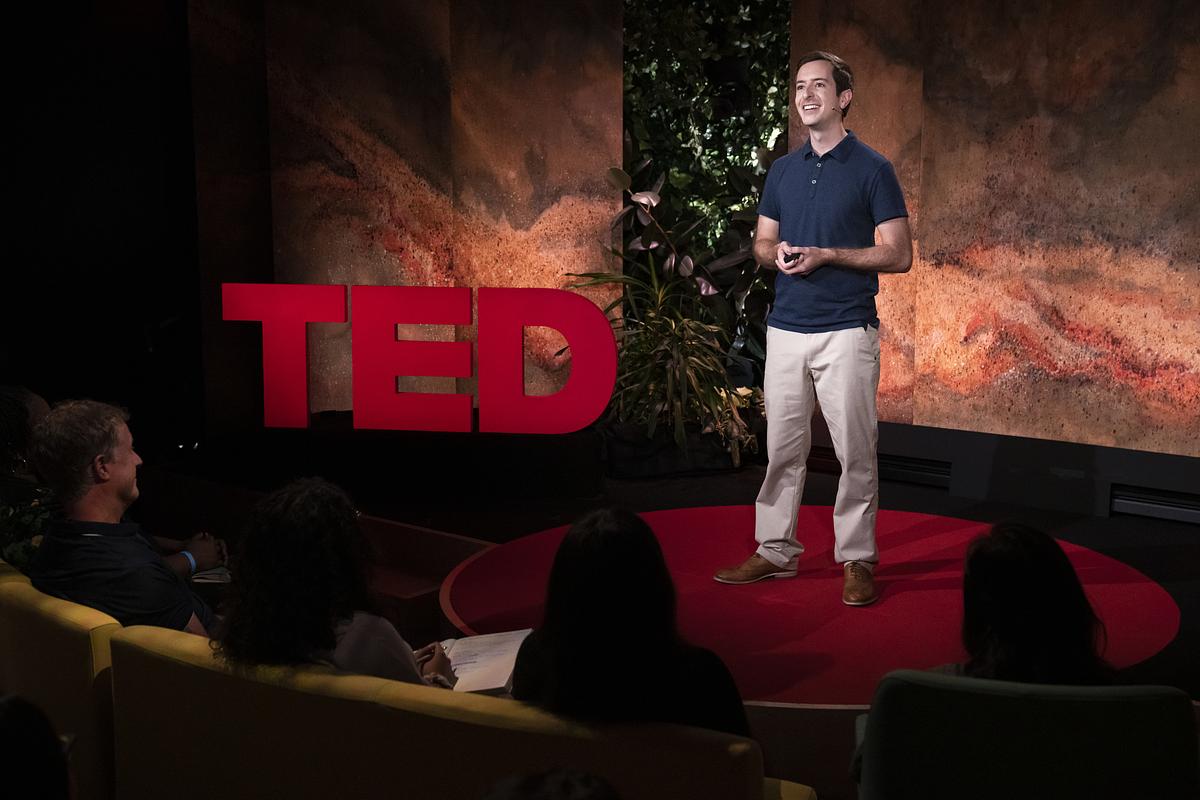 In his TED talk, Harvard MBA candidate and impact investor Miguel Goncalves explored the important role of ESG (Environmental, Social and Governance) investments for Millennials and Gen Z as these generations navigate global issues caused by the climate crisis.

His career has centered around consulting and investing in private companies including venture capital. Goncalves believes that sustainable investing can thrive if we look holistically at wealth building practices that also encompass problem-solving in social and income issues as well as climate change. He is working on convincing more traditional investors that ESG investing is a viable and smart way forward.

In addition to sustainable investing, Goncalves is also a classical music enthusiast who plays bassoon whenever he can. Most of his family lives in Venezuela, and he works to help those in his home country whenever he can. “You are never fully ready nor are you necessarily the best or most qualified to do something but sometimes it’s just about throwing your hat in the ring and doing it.” 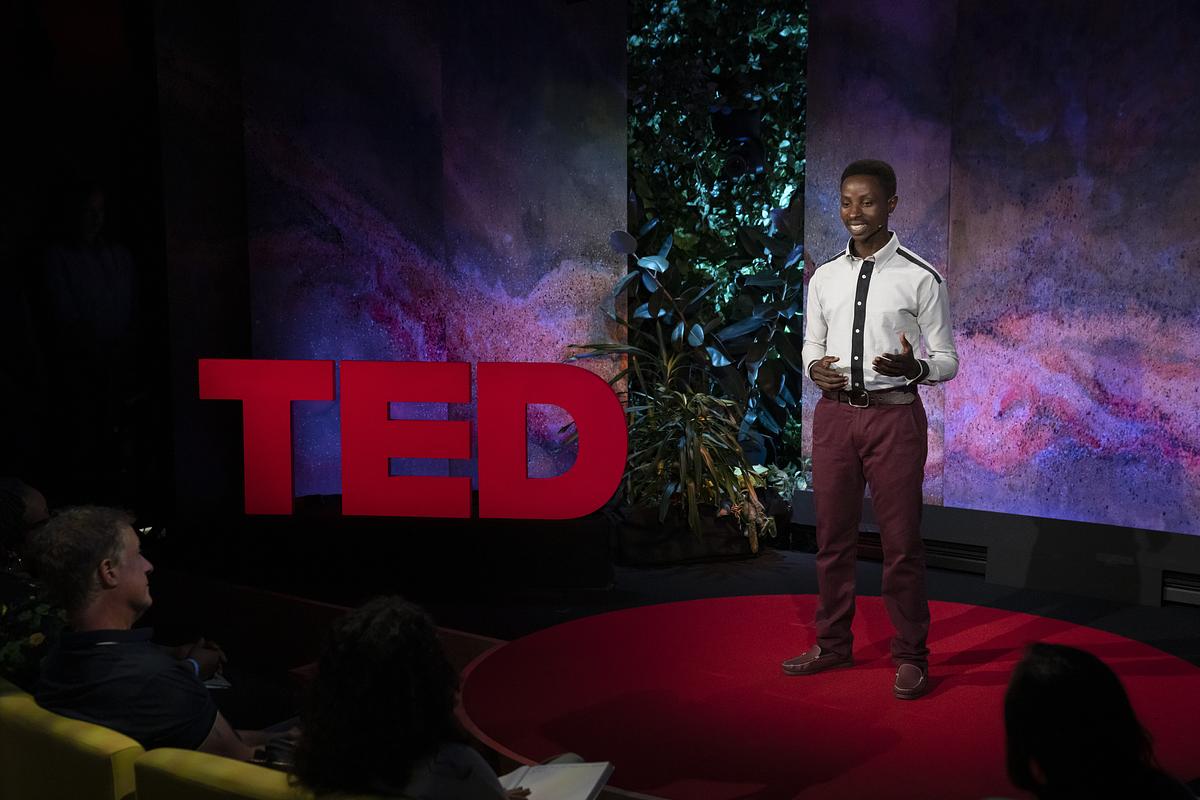 Refugee Education Innovator Joel Baraka grew up in the Kyangwali refugee camp in Uganda, eventually winning a scholarship to attend the African Leadership Academy in South Africa and then university in the United States.

Uganda is Africa’s largest refugee-hosting nation, with more than 800,000 of its 1.4 million refugees being below the age of 18. As of 2017, 59% were not currently in school. Drawing on his own lived experience to help tackle this problem, Baraka developed an interactive board game which educates students in refugee camps in Uganda and elsewhere in Africa. Barka shared, “When you’re growing up, living in a refugee camp, at some point you hope to get out. With education, you can be anywhere.”

He knew that to reach young people, he needed to center play and could “gamify” education with fun, hands-on learning. He developed 5 STARZ, an educational game used daily in refugee camp schools, that is now also a nonprofit. Baraka knows textbooks and memorization are not the best ways to help children learn and technology isn’t helpful when it’s not accessible.

Baraka started watching TED Talks as an adolescent and hoped one day he would have the chance to stand on a TED stage. When applications for the TED Bezos Scholar salon opened, he decided to go for it. “I told myself just give it a try. If I don’t get it, it’s ok. I’m still young.”

While he was waiting to begin his talk, the thought of Baraka’s family centered him. “When I went on the stage, I thought, ‘this will make my family proud.’ This is no longer about me. It is about my family, my parents and the kids in the refugee camp that use the games.”

Baraka reflects on the children in the refugee camp. “They deserve a chance,” he says. “Those kids really give me hope and it is my duty to go and fight for those children. What I do today can help those kids and influence their lives forever.” 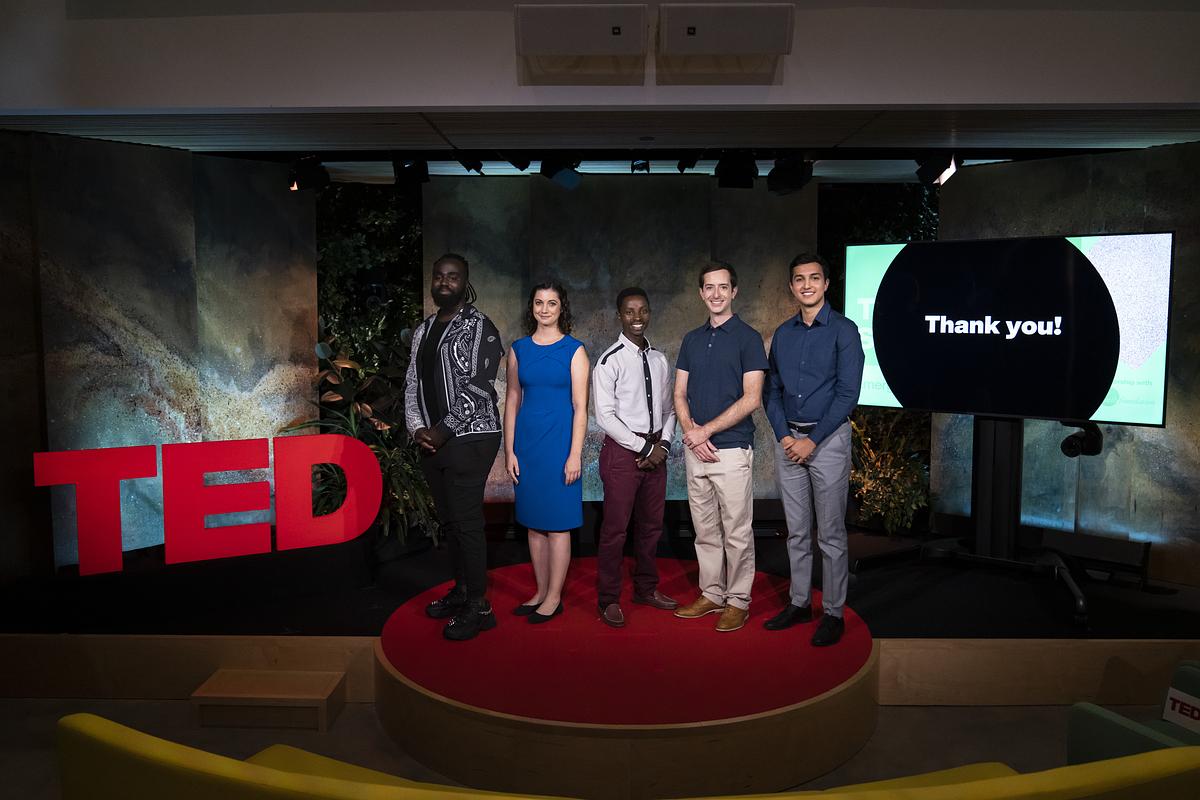 Scholar alums presented their talks on the TED World stage in New York City on September 9, 2022; talks were live-streamed and all will be posted on TED.com in the future. Currently, you can view:

Bezos Scholars Program is a year-long leadership development program for public high-school juniors that helps them discover their voices and capacity for making change. The next TED Bezos Scholars Salon is slated for 2024.