Can a shift in a hospital’s culture change professional practice and parent behavior? 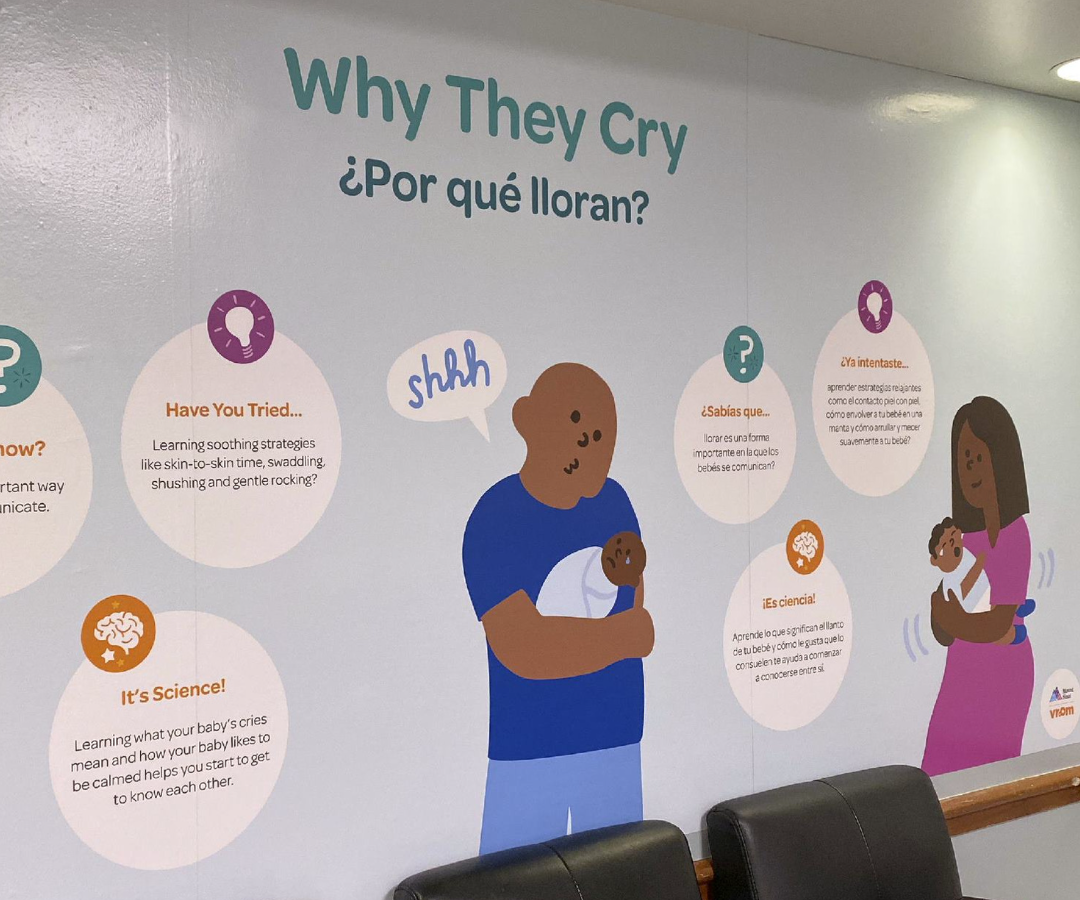 Dominique Weiss, a nurse and lactation consultant at The Mount Sinai Hospital in New York City, recalls when she became a new mother to twins a few years ago. The first days after a baby is born are often filled with a range of emotions for tired new parents, and Weiss was no exception. “You’re exhausted, distracted and now the pressure is on,” she says. “It makes for a terrible learning environment.”

Weiss works with parents at Mount Sinai in the first hours and days after labor and delivery, where more than 8,000 babies are born each year. As an educator in a healthcare setting, Weiss notes how the pressure is on to reach parents and caregivers as they learn how to care for a new baby in the short time they are typically at the hospital.

To incorporate learning for new parents and families of young patients, Mount Sinai partnered with Vroom — a program of the Bezos Family Foundation which uses science-based tips to help parents and caregivers brain-build — in 2018 to explore how early learning can be woven into every job description and reinforced in everyday healthcare moments in underleveraged spaces. The partnership included three main levers: staff training on the science of early learning; program evaluation of staff, parents and caregivers to measure behavior change and knowledge shifts; and the installation of more than 100 science-based messages throughout areas of the hospital. Vroom decals and materials transformed blank walls, elevators and tabletops in busy clinic spaces with colorful brain-building messaging for parents and caregivers of children ages zero to five.  Messages are customized to the interaction taking place and informed by staff, with tips matched to when babies are being weighed and measured or having their blood pressure taken.

Staff report that the decals made a big difference in making common spaces welcoming for families. “The fifth floor went from being very stark and sterile, to having life and color and warmth,” Weiss says. “We’re often riding elevators with patients going from labor and delivery, and it’s a nice way for new parents to see this is a place that’s really focused on helping them not only recover from the delivery, but also to set them off on the right foot.”

The installation, training and evaluation at Mount Sinai were aiming to answer a central question: Can a shift in a hospital’s culture change professional practice and parent behavior?

The science of early childhood development has proven that by positively engaging with children in everyday moments, beginning in their first days, adults can set the course for a bright start in learning that lasts for a lifetime.

A key message of Vroom is that no matter where you live and what resources you can access, parents and caregivers have what it takes to parent their child. Folding laundry, waiting for the bus, or going to the grocery store all offer moments to interact with children and grow.

That mindset moves beyond parents; hospital staff also have what it takes to be a brain-builder in their role, be it lactation consultant or maintenance professional. The pilot program’s cross-team training program for more than 1,100 Mount Sinai hospital employees included medical providers and non-clinical team members who interact with families. Training teams included staff from clinical disciplines such as nurses and social workers to non-clinical roles including security, administration, housekeeping and patient transport.

It’s a fresh and uncommon approach to present the same message and learnings in a collaborative, cross-team environment. Training included an introductory video, hour-long lab to introduce the program’s core modules, and follow-up communications including newsletters to keep the message of Vroom and early learning top of mind.

Mount Sinai Learning and Development Specialist Dan Iwrey led staff trainings which incorporated the science of early childhood development to show teams how to incorporate Vroom when interacting with parents and families. “It was really about tapping into their passion for early childhood development and their passion for supporting and helping parents,” Iwrey says. “We drove home that no matter what you do whether you’re clinical or administrative, if you have an interaction, no matter how short with a family, you can make a difference in how they interact with their children.”

Many staff are also parents and were able to apply learning from the training to their own lived experience. “We wanted to empower people by teaching by example. We wanted to encourage staff to actually talk directly to babies and children with parentese and exaggerated facial expressions,” Iwrey says. “It wasn’t about telling families what to do, it was really about showing them how to do it.”

“It was really great to get all different kinds of people in the room together, sharing about their experiences, learning from one another,” Iwrey says. Trainings were agile and centered on listening and creating relationships and achieving buy-in, not just on the leadership level, but from the whole staff. “I have a distinct memory of meeting with a bunch of security guards at like seven in the morning during their pre-shift huddle. They were incredibly interested and so motivated to be a part of this, and glad to be recognized that they play a role in the patient experience and in the experience of parents.” 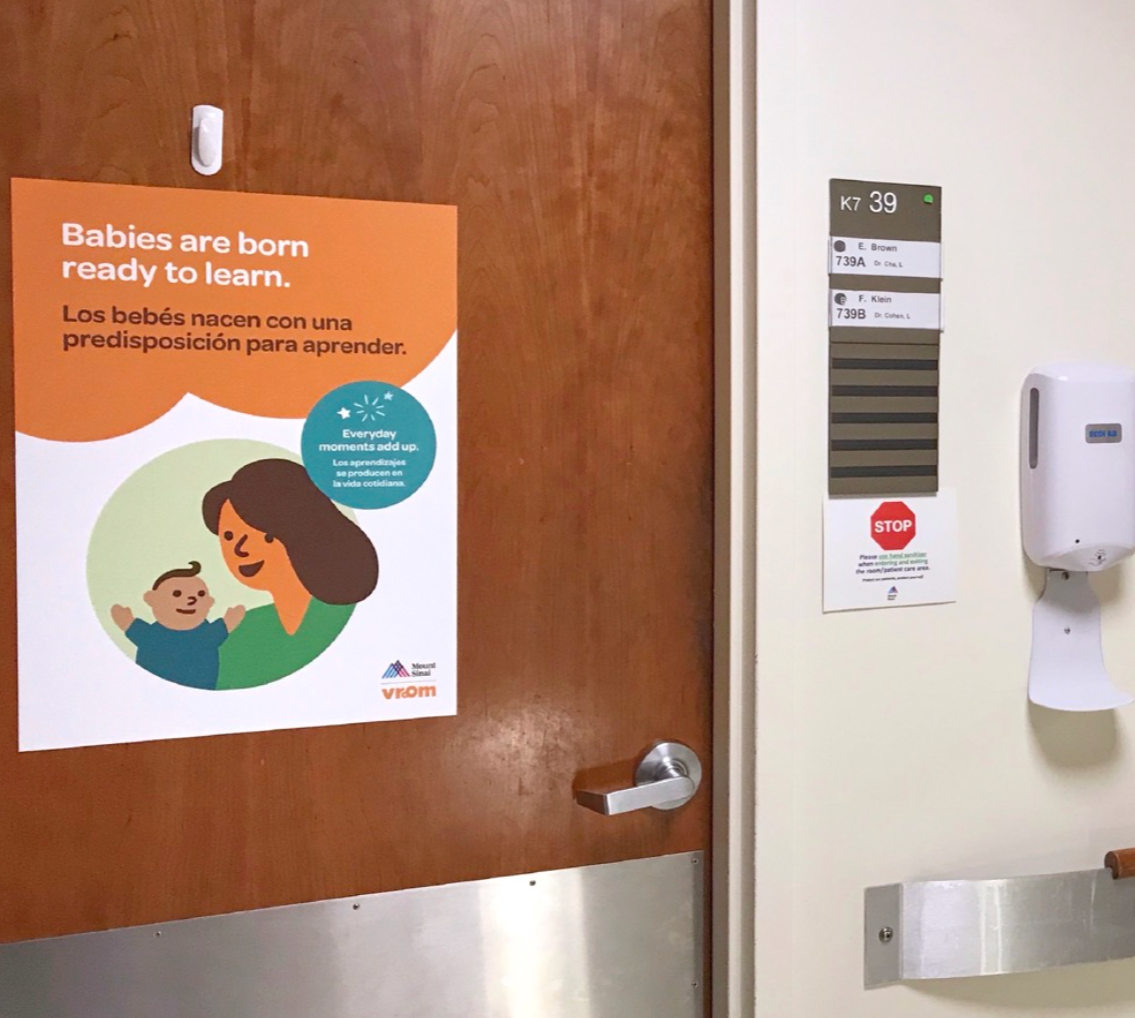 A Message for Everyone

Staff were trained to interact with patients about Vroom both inside and outside of the hospital. Mount Sinai sends patients home with handouts and booklets with information about topics including self-care and breastfeeding. “Now, when parents are being discharged, I always make sure to ask to see their admission folder and highlight some things including Vroom. I’ll ask if they’ve heard about the Vroom app and take a minute to talk about the neurological connections that they can foster in their baby’s first year. Their eyes light up,” Weiss says. “Because what parent doesn’t want to help their children grow and develop and learn?”

Iwrey says that staff he trained were interested in the long-term behavioral outcomes of Vroom, as well as the social justice elements of the program, which reaches everyone with no cost tips that don’t take a lot of time and incorporate everyday items and situations. “One of the units we worked in was a publicly funded clinic with staff who were interacting with people who didn’t necessarily have resources and materials available,” Iwrey recalls. “Staff on that unit especially felt so empowered by Vroom tips and felt that they were stepping in to fill that void and realizing that a lot of parents come to the healthcare setting, not just for healthcare, but to learn about their child’s development.”

Nine out of ten staff members and parents and caregivers said Vroom signage, materials and messaging were empowering and welcoming for families. Behavior change was also reported from a pre- and post-program survey, with 96 percent of team members sharing out loud what child patients were seeing and doing — a 27 percent improvement from the start of the partnership. Early program evaluation data also confirms that families and team members agree that everyday healthcare moments don’t take a lot of time and can be transformational.

Resources were tested throughout the pilot project between Mount Sinai and Vroom with adaptability in mind. The Vroom team has been able to refine materials that are the most scalable and cost effective for additional healthcare partners. A digital starter kit is rolling out this winter, including virtual and in-person training modules for staff and shareable materials to begin brain-building with families in healthcare settings.

Iwrey appreciated how Vroom takes things that we may do intuitively, like using parentese, and drawing awareness to them so more parents, caregivers and staff do them intentionally. getting parents, caregivers and staff to do them intentionally. “That was a light bulb moment,” Iwrey says of the impact of the training. “I saw how it was becoming more methodical for staff to talk to babies, and that was a big change. I observed nurses and different professionals were also taking a moment to explain to the parents what they were doing.”

After working on Vroom training for a couple years, Iwrey’s biggest overall takeaway is how much all staff can help parents learn in the hospital setting, and what a great untapped resource medical facilities can be. “Because you don’t know how many times a parent is going to listen to a podcast, you don't know how many times they're going to talk to their friends or read a book,” he says. “But, you know, pretty certainly how many times they’re going to go to the doctor with their baby. If we're not making the most of that interaction, then I think we might be missing an opportunity.”

According to Iwrey, to make Vroom sustainable, “it just needs to be hardwired into the DNA of how new staff are trained by building these simple, sticky concepts” into their everyday work. “When I would observe staff by spending time on the floor, I could hear a slight difference in how they were talking to babies and families. And to me that was a victory.”

Learn details about how the Vroom partnered with Mount Sinai Parenting Center in New York City to reimagine and expand ways to better support families in health care settings through staff training on the science of early learning, program evaluation and the installation of more than 100 science-based messages throughout the hospital. View the Case Study and read more on Early Learning Nation.