Meeting children where they are with what they need.

Plaza. Piazza. Town square. The names may differ region to region, but they describe similar spaces: a place where residents of a town or neighborhood—young, old and in-between—gather and interact simply as a function of their shared lives. Throughout human history, those spaces have provided a lush learning experience for the children playing around, among and with the adults gathered there.

That focal point of the piazza has gone missing in much of contemporary American society—along with the very idea of play as a worthy human activity—but a new movement is afoot to bring back such public spaces, with a 21st century twist. What if the everyday places where people spend time—bus stops, parks, grocery stores and other public areas—could be transformed into learning hubs in which the design of the place itself organically calls for interaction among caregivers and children?  What if those places actually invited play in a highly specific way that could help children develop academic skills and the competencies they’ll need in a rapidly changing future?

What if the everyday places where people spend time—bus stops, parks, grocery stores and other public areas—could be transformed into learning hubs in which the design of the place itself organically calls for interaction among caregivers and children.

An exciting answer to those questions is the Playful Learning Landscapes (PLL) movement, which fuses the science of learning with architect Itai Palti’s Conscious Cities movement to transform mundane built environments into something more magical. The brilliance of the venture is that its installations manage to cover the scientific bases without looking as though they’re doing much at all — just providing a lot of fun with an upgraded version of hopscotch or puzzles on a wall that abuts an ordinary park bench. 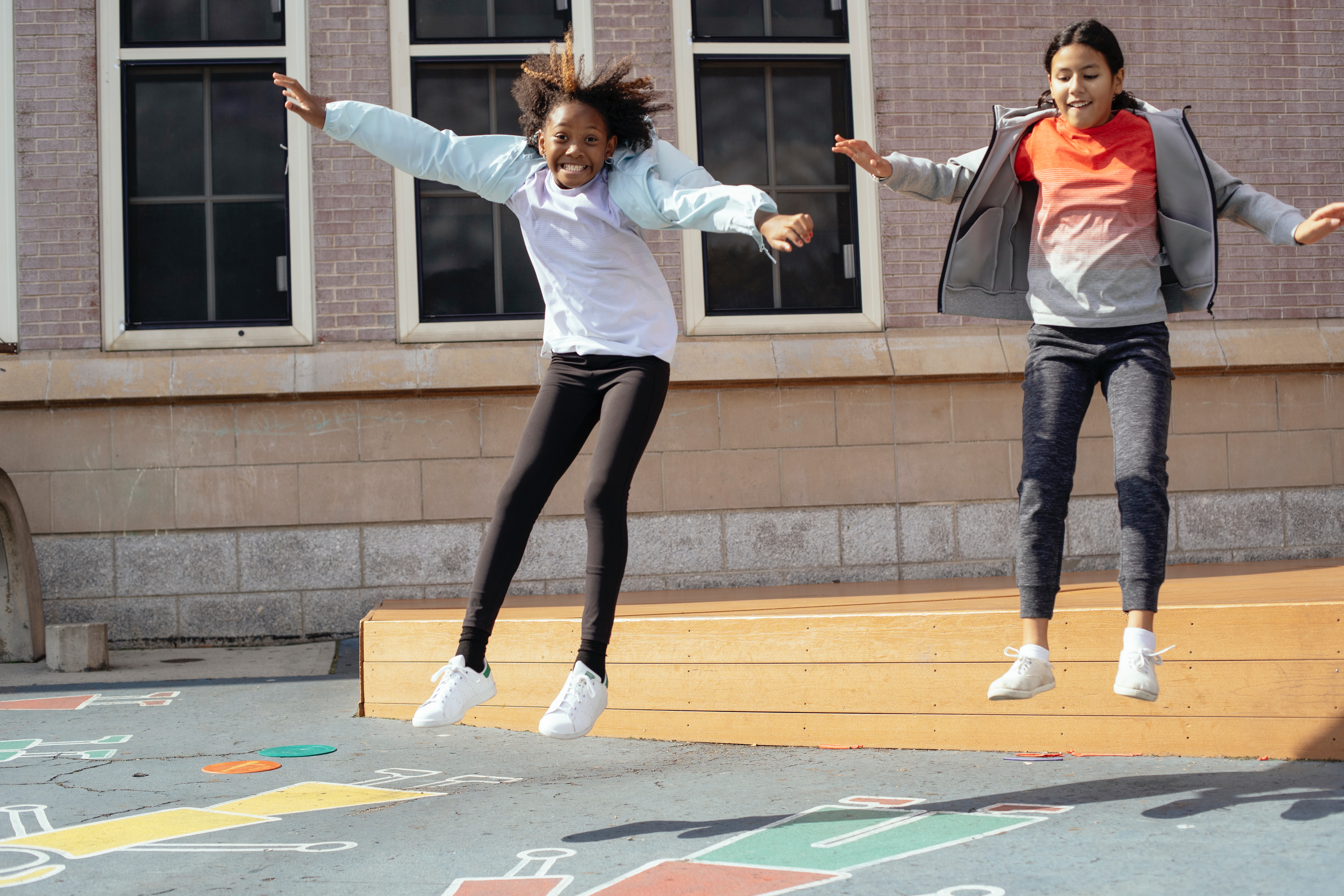 “As we started planning our Urban Thinkscape project, for example, we asked some basic questions,” says early learning scholar and author Dr. Kathy Hirsh-Pasek. “We wondered why a bench is ‘just a bench’ and if it has to be just that. Couldn’t we transform a normal bench? One of the easiest ways to achieve that was to put four different puzzles right next to the bench.

“It turns out that when people are playing with puzzles, they are not only discussing things like alignment, but concepts like ‘on, around and through’ and asking, ‘Does it match?’ — which all turn out to be spatial terms that relate to later math and STEM ability.” (Science, technology, engineering and mathematics).

The serious side of Playful Learning Landscapes is its focus on an urgent need globally to optimize early education in and out of schools. The U.N. reports that by mid-century, more than two-thirds of the world’s children will be living in urban areas and that most will reach adulthood without even the basic secondary skills required for work in a rapidly changing world. One response to this urgent need has been good progress on creating high-quality universal preschool, a critical step that has been shown to make a difference in school readiness that translates into later successes. However, this solution alone can’t really remedy the need.

Children typically spend only 20 percent of their waking time in classrooms. Some societies, including the U.S. to some degree, have tried to optimize that remaining 80 percent of kid hours by piling on more schoolwork, tutoring and assignments in an effort to give children a head start on academic skills such as reading and math. In this paradigm, play is viewed as superfluous and expendable.

“We know from the research that children learn the most when they are active, not passive,” Golinkoff says. “Schools often have little kids sitting for enormous amounts of time, receiving information from above, and that really doesn’t work. You can throw a phone book at an adult and tell them to memorize the first page and they’ll figure out a way to do that because adult minds have metacognition, which is the ability to push our minds around in service of our goals. Children don’t have that yet, so we have to make learning exciting and enable them to be active.

“One thing psychology has shown us for the past 25 years is that children learn language and learn about the world when they have conversations where they are active participants with caregivers. Whether that’s a grandparent, a father, a mother, it doesn’t matter. Kids learn when they have the opportunity to participate in the conversation about things they’re interested in.”

Golinkoff and Hirsch-Pasek describe themselves as professors and intellectual entrepreneurs who take research out into the world in a way that involves people and doesn’t just show or tell them information but makes them a part of it. With the Brookings Institute, they set about to create installations to captivate children’s minds in ways that support lifelong learning and great social outcomes — and they made sure those installations are in the children’s own neighborhoods.

“They don’t have to travel, they don’t have to pay money,” Golinkoff says. This is especially important for low-income communities, where research shows the children tend to lag behind more affluent peers in language and spatial skills from a very early age and often have less access to resources and interactions with caring adults that can assist in their development.

Lots of kids don’t have homes filled with puzzles and books, but can’t we do something to spark those conversations and involve two or maybe three generations in the process?

“If I am a parent and I have to worry about my child being safe and being fed, honestly, one of the last things on the list is whether I’m giving them cognitive stimulation,” Hirsh-Pasek says. “Lots of kids don’t have homes filled with puzzles and books, but can’t we do something to spark those conversations and involve two or maybe three generations in the process?”

The goal of the PLL installations and activities is to move beyond the replication of a “one size fits all” installation to work with communities, businesses, governments and other organizations to create specific projects that incorporate playful learning design and principles into a variety of spaces that fit into the neighborhood. Many of these projects can be quite inexpensive, such as “Supermarket Speak,” in which the scientists posted funny signs in grocery stores, with questions designed to promote parent-child interaction — Do you know milk comes from a cow? What else comes from a cow? The researchers observed a 33 percent increase in parent-child interaction when the signs went up, Hirsh-Pasek says. All for a project cost of $65.

LEGO provided $5,000 for another project, “Play Wall,” that involved placing chalkboards in neighborhoods inscribed with the phrase, “When I was little, I played …” and chalk so people could fill in their answers.

“In two and a half hours, the neighbors had filled up the chalkboard with things they had liked when they were little and the older people were teaching some of the younger kids some of their games,” Hirsh-Pasek says. “Everybody gathered around those chalkboards.” The project hopes to host an intergenerational event featuring those games.

Key to the success of each installation has been the active participation of community members. In one Philadelphia project, for instance, community members picked a spot where Martin Luther King, Jr. had given one of his first speeches and more than 100 community children helped build the installation. PLL hired neighborhood people who didn’t have jobs and trained them to be “data ambassadors” who observed and recorded the project’s impact, following professional, scientific protocols that govern studying human subjects.

The future for most of the world’s children will be markedly urban. Results from Playful Learning Landscape’s pilot projects show that with thoughtful design based on careful research, cities themselves can become change agents that captivate children’s imaginations, foster intellectual and social development, and enhance human interaction just like those familiar piazzas.

K.C. Compton worked as a reporter, editor and columnist for newspapers throughout the Rocky Mountain region for 20 years before moving to the Kansas City area as an editor for Mother Earth News. She has been in Seattle since 2016, enjoying life as a freelance and contract writer and editor.

Early Learning Nation (ELN) is a nonpartisan, independent online magazine focused on early learning, featuring original news, interviews, videos, and resources from communities across the U.S. An initiative of Bezos Family Foundation, ELN leads with science and connects with early learning professionals, parents, policymakers, scientists, community leaders and others to share the latest findings, challenges, and successes in the field. Learn more at the EarlyLearningNation.com.